These best practices reflect the expertise of Obeo engineers who have developped Acceleo.
They can help you develop or tune your own Acceleo-based code generators.

An Acceleo project is an Eclipse plugin project and as such it should be named following this structure:

A. 1. Modules, templates and queries

Do not use any OCL or Acceleo keyword for the name of your modules, templates, queries or variables.

B. Architecture of an Acceleo project

The root package of an Acceleo project should share the same name as the project.

B. 2. Organization of the packages 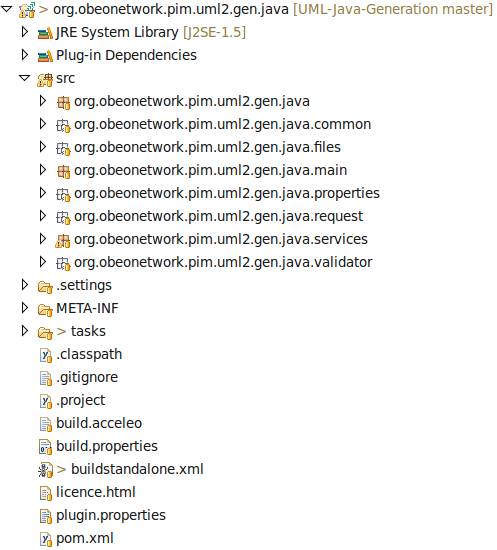 Example: the module generating a Java class could be named "classFile" and it should be in the package named "files". All the other modules related to the generation of the Java class can be contained in the package "common.classfile" for example "imports.mtl", "attributes.mtl", methods.mtl" etc.

The main package, the properties package and the service package should be exported. Java services will not work when the generator is deployed if the package containing those package is not exported in the MANIFEST.MF (runtime tab). It is recommended to export all the other packages but to keep them "hidden from all the plugins".

When writing an Acceleo module, there are some rules that should be respected:

In Acceleo and in OCL, "null" is "OclUndefined", when you are testing for a "null" variable, you should use "isOclUndefined()".

Do not use Acceleo or OCL keywords in your expressions, for example, if you have to manipulate a feature named body, instead of [myElement.body/] you should use [myElement._body/] since body is an OCL keyword.

Do not use the implicit context to call an operation [myOperation()], always use an explicit variable [myVariable.myOperation()/]. In this example, you can see what Acceleo will call with implicit variable. The result may not be what you had in mind. 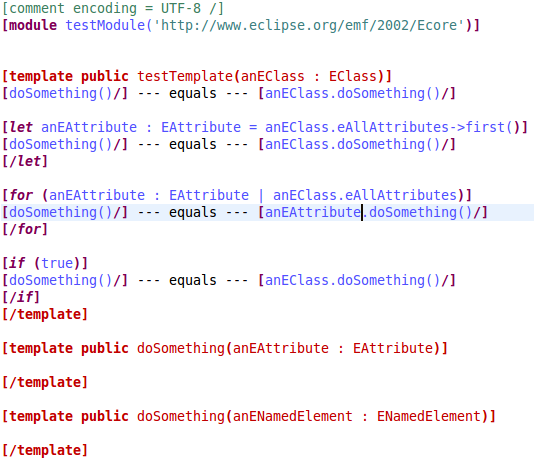 Acceleo 3.1 has introduced a documentation block, it should be use to write the documentation of the templates, queries, modules and variables.

An Acceleo module should follow the same conventions regarding its metric as a Java class. It is thus not recommended to have an Acceleo module with more than 30 templates and queries or with several thousands lines.

C. 8. Use of the qualified name to import or extend a module.

All the "import" or "extend" declaration should always use the qualified name of the imported or extended module [import com::mydomain::myproject:: (...) ::myModule/] and not the simple name [myModule/]. If you use the simple name, the first module found with the same simple name will be used. 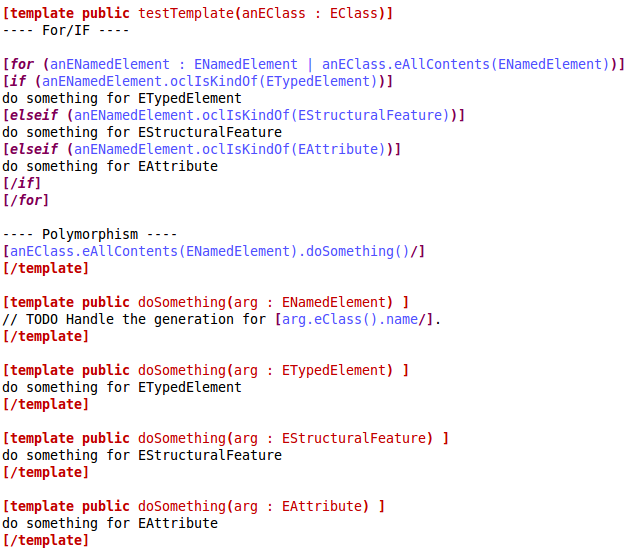 When generating a file, the path of the file should be calculated by a query. It is recommended to use queries to calculate repetitive piece of code because a query will keep its result in cache (if you call the query again with the same parameter, Acceleo will not re-evaluate the query, it will return the result of the query during the previous evaluation with the same parameter).

C. 11. Granularity of an Acceleo module

While writing a module, you should think about the re-use of your generator. As such, it is recommended to have a very small granularity for your templates even if it seems trivial. In the following example, you can see a template to generate the name of any NamedElement. One would imagine that a template like this would be useless but if you want to change the naming convention of all the element of your generator, you just have one template to change or to override.

C. 12. Usage of the visibility of templates and queries

Templates and queries have a visibility, it is recommended to use as much as possible the private and protected visibility in order to minimize the amount of template and queries in the API of the generator.

Parenthesis in the "if" and "for" block should always be used.

C. 14. Entry point of a generation

C. 15. New cast to EObject except while generating on Ecore

If you are not generating on the Ecore metamodel (http://www.eclipse.org/2002/Ecore), you should not try to cast anything to one of Ecore classes. If you want to define a very generic template, you should use OclAny as the type of your variables.

In order to compare an enumeration literal, you have to do: MyObject.myEnumValue = MyEumeration::myEnumerationLiteral.

C. 17. Manipulation of the result of a Java services

The operation will return a Sequence of String (List<String> in the Java operation) but the Acceleo parser uses the signature of the operation invoke, as such the result is "OclAny" (the engine will make sure that this OclAny is a Sequence of String in reality). By using the type OclAny, the parser sees OclAny->asSequence() and thus the operation is compiled as Set(OclAny)->asSequence(). When the engine executes the call to "invoke", its result "replaces" the OclAny and as a result we obtain a Set(Sequence(String)) which is then pass to "->asSequence()" and the final result is "Sequence(Sequence(String))".

Some operations in Acceleo can be time consuming and as such it is recommended to embed them inside of a query to take advantage of the cache of the query. Among those operations, you can find "eAllContents()", "eAllContents(OclType)" which are both iterating on the whole subtree of the current model element and "eInverse()" which needs to initialize a cross referencer on the whole model the first time it is used.

Java services should be used to query the model and to filter the element of the model. It is not recommended to use Java services to return large amount of text. The text should be generated by Acceleo templates.

Java services should be wrapped in a query in order to minimize their impact in the generation by having a cache of their result and so as to only manipulate Acceleo concepts (templates and queries) in most of the generator.

It is recommended to minimize the use of Acceleo primitive as input parameter or output of Java services.

Java services should not be called directly from a template without being wrapped in a query.

In order to prevent problems with the traceability information calculated by Acceleo some conventions need to be followed.

E. 1. Modification of the generated code

E. 3. Parameters of templates an queries

The use of templates or queries without any parameters is also not recommended. In order to link the generated text with a model element, Acceleo needs a model element as a parameter of the template or the query.

One of the key best practices in code generation is to generate code as if you would write it manually.

To minimize this risk, when it does not alter the quality or the performance of the code, you can break the rule mentionned previously, by separating generated code and hand-written code in different files. There exists several patterns depending on the implementation language (subclassing generated classes by hand-written classes in java, partial classes in C#).